From fMRI to cybersecurity: the 2012 edition of Human Security Perspectives identifies key human security challenges on the Internet 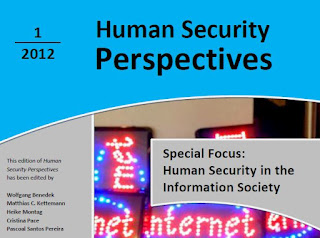 I am happy to announce that the  2012 edition of Human Security Perspectives, a peer-reviewed online journal on human security issues in a complex world, has just been published.

The 2012 edition of the journal I am co-editing is dedicated to Human Security in the Information Society.

The contributions look at a broad variety of topics, from cybersecurity to the role of the European Parliament, from human security and social media to the use of fMRI and human rights.

Human Security, the concept to which the journal is dedicated, is a broader, more political notion, than human rights and can support the process of operationalization of the commitments to online human rights. For an introduction into the relationship of human security in the information soicety, see the introductory contribution by Wolfgang Benedek.

My own contribution tries to connect the dots between the recent Human Rights Council resolution and human security.

"[the Resolution] is not the end of the debate, neither is it the beginning. Rather, it is the end of the beginning (where the extent of human rights online was doubted by some states). Thanks to the Human Rights Council, we now have a clear yardstick against which future national and international policy-making bearing on Internet and human rights can be measured.
With the stage now set for the operationalization of the commitment to human rights online, the concept of human security in the information society, as discussed in the contributions in this volume will be immensely important to inform the interpretation of human rights online and to limit states. limits on online freedoms.
Concluding, the Human Rights Council Resolution was a boost for human rights as it pushes their protection further into the limelight of international discourse. It is in this process that the concept of human security in the information society plays an important informative role and will, in turn, be influenced by the evolution of Internet rights and principles. Thus, a human rights-based International Internet Law can solidify."

Most other contributions are longer versions of selected excellents presentations held at the 2012 Graz Workshop on the Future of Security that was dedicated to the same topic.

In the coming posts, I will discuss the ideas contained  in selected contributions in more depth, but for the time being, I encourage you to have a look at the new edition of HSP.

I Keynotes
Wolfgang Benedek, Human Security in the Information Society
Jörg Leichtfried, How the European Parliament Safeguards Human Rights on the Internet
Gerhard Jandl, The Challenges of Cyber Security – a Government’s Perspective