As "f-bombs" and "sexting" are included in the Merriam-Webster, taboo words are still used as pretexts to online censorship (part 2)

A second article,celebrating the inclusion of the "f-bomb" in the Merriam-Webster(though the author would have probably found little to celebrate), is quiteremarkable in two ways. First, it deals with the very salient topic ofregulating vulgarity through law and makes an important contribution tounderstanding the challenges freedom of expression is facing - in offline andonline scenario. Second, it looks at a taboo word. And calls the word by itsname. Thus the author reflects on, and breaks, the taboo - making reading thearticles something of a guilty pleasure. Not a feeling that many law reviewarticles evoke, I gather.
I am talking about Christopher M. Fairman's articleentitled Fuck that was published in
CARDOZOLAW REVIEW [2007] vol.  28:4, 1711-1772. 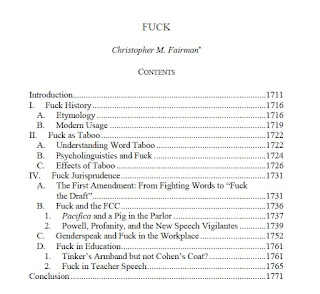 Fairman himself notes in a comment his paper that he had been interestedin the topic for quite some time, but had only recently - having reached a secure position in academia - found the courage to challenge thetaboo.
He writes:
"Several of my colleagues counseled me that Iwould never be able to get this piece published unless I altered thetitle. Whether it reflects courage or folly on the part of theeditorial board of this law review, I am grateful for their support in mydecision to use the word still viewed through the lens of taboo by so manyothers. I am well aware that I risk offending some readers. I view this asmy duty. As my former professor Sandy Levinson recentlyexplained, “Teachers in particular may be guilty of evading part of theirown responsibilities if they become too fastidious in ‘avoiding . . .words that shock.’” Sanford Levinson, The Pedagogy of the First Amendment:Why Teaching About Freedom of Speech Raises Unique (andPerhaps Insurmountable) Problems for Conscientious Teachers and TheirStudents, 52 UCLA L. REV. 1359, 1360 (2005). Discussing offensive speechrequires that one be willing to breach standard norms and run the “risk ofoffending. I think it is as simple as that.” Id. at 1390. On thismatter, I cannot agree more with Professor Levinson." (1711-12)
And I agree with Mr. Fairman.
We all haveresponsibilities for the words we employ and for their protection. It isessential to study in the future how taboo language is used as a pretext tocurb freedom of speech in some countries.
As recent reports by the Electronic Frontier Foundation and the Economist show even a democratic country such South Korea has been activelyusing references to taboo words as tools to curtail freedom of speech. TheEconomist particularly criticized the "supposedly independent KoreaCommunications Standards Commission [that] has had the remit [since 2008] topromote a “sound and friendly communications environment”.

"Sound and friendly" doesn't bode well for freedom of speech. Andindeed, a recent NYTimes article foundthat using curse words in South Korea can get you censored quite easily.
As the European Court of Human Rights ruled in Handyside v. UK it is not sound and friendly communicative acts that needprotection, but those that shock, offend and disturb.
In this light, breaking taboos can be a goodthing.
Or as Mr. Fairman puts it his almost poetic lastline of his article:

"Fuck must be set free."