Towards an Increased Role of Individuals in International Law: What Lessons Does Internet Law Hold? 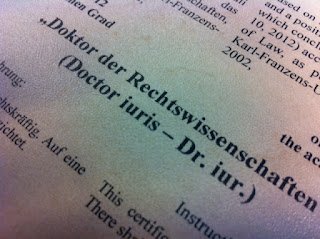 I am happy to announce that as of today the University of Graz has conveyed upon me the title of Doctor iuris.

I received my doctorate for my thesis entitled "Revisiting the Interposition of States Between Individuals and International Law with Special Reference to International Internet Law".

As I prepare the manuscript for the publisher, I would like to engage in an open discussion of some of my main themes.

Let me give you some background.

50 years have passed since Georg Dahm was able to say in a discourse on the position of the individual in international law that “not long ago the topic […] would not have been understood or would have been conceived as devoid of any meaning. After all, it seems as if international law is the part of the legal order that has the least to do with humans.”

This has changed substantially. The German scholar could not have foreseen the emergence, over the last five decades, of the human rights regime and the reorientation of international law towards protecting and empowering individuals. Today, international law is probably the legal order that has the most to do with humans.

Yet still, this "humanization" is only imperfectly realized and both the actors recognized by international law and the instruments used to regulate international affairs are state-oriented and/or state-driven.

In my thesis, I apply a different approach - the functional approach - and suggest to overcome intermediation by default and apply a more nuanced regimes of role allocation in international law. I focus specifically on the dynamics at play in International Internet Law, as it is an emerging normative field largely free of entreched actor roles. Also, it's a field I know well.

In the coming weeks I will post key elements of my thesis here and would welcome suggestions and thoughts.

As a first introduction, have a look at my key findings: