Mass Surveillance - a big issue for freedom of expression

I’m heading to Strasbourg today for an exiciting two-day conference on Freedom of Expression. You can find the impressive line-up of speakers here.

I’m rapporteur for a session 5 – Decrypting the  implications  and  assessing  the  costs  of mass surveillance on freedom of expression with four exciting panellists:


You can follow the conference live: Original delivery, English, Turkish.

I’ve also been asked to prepare a little introduction into the topic – here it is:

Mass surveillance of Internet traffic, as disclosed by Edwards Snowden, has changed the way people see the Internet and act on it. It has shattered the (implied) trust placed in security of the communicative networks, it has had chilling effects on freedom of expression and the right to privacy, and it has deeply impacted the relationship between states long adhering to the notion of positive social change through a human rights-based information society. As a recent report on mass surveillance by the Parliamentary Assembly of the Council of Europe concluded, US agencies and their partners in certain Council of Europe member states have introduced surveillance systems that escape democratic control and accountability and endanger fundamental rights, including freedom of expression.

The ‘costs’ of mass surveillance over the Internet are substantial, the ‘benefits’ are demonstrably small: when compared with targeted surveillance mass surveillance is not more effective in the fight against terrorism and organised crime. Rather, deliberate steps towards weakening encryption standards and installing ‘back doors’ in secure communication services to facilitating data collection can pose a serious threat to national security when exploited by bad actors. Cooperation in the fight against terrorism and organized crime is essential, but it must be based on mutual trust and anchored in respect for human rights and the rule of law. The findings of the PACE report were echoed in a report adopted by the European Parliament in September 2015 (2014/2232(INI)) that underlined the importance of encryption and privacy, including a call for an end-to-end encryption standard without ‘back doors’ for government agencies, and strongly criticized the national security argument often used to justify mass surveillance.

The European Court of Human Rights has long established the principles under which freedom of expression can be restricted. Applying its jurisprudence to mass surveillance meets factual and jurisdictional difficulties, but not unsurmountable ones. Clearly, any restrictions need to be prescribed by law and need to be necessary in a democratic society for the pursuance of certain legitimate goals, such as national security or the prevention of crime. The mass surveillance system as implemented by Council of Europe member states largely does not meet these criteria, as it was not prescribed by law and is not proportional. States must ensure that only necessary surveillance takes place for clearly defined set of objectives (and enumerated offences) and that threats must have reasonable basis in fact. The conditions under which collected data can be transferred to law enforcement (and to the agencies of other states) must be narrowly defined and subject to oversight. The conditions under which collected data can be searched and which selectors can be used also need to be clearly defined. When selectors are attributable to specific persons, heightened accountability standards need to be met.

The Court has developed important principles for surveillance in the case of Weber and Saravia v. Germany, which is still a controlling case, and its decisions in Klass and Others v. Germany (importance of judicial supervision for surveillance measures), Bucur and Toma v. Romania (protection of whistle-blowers), Iordachi and others v. Moldova  (narrow definition of what constitutes a restriction on the grounds of national security) and El-Masri v. the former Yugoslav Republic of Macedonia  (importance of democratic oversight over security and intelligence services).  Further guidance can be expected in two pending cases directly related to the legality of mass surveillance: Big Brother Watch and Others v. the United Kingdom (no. 58170/13) and Bureau of Investigative Journalism and Alice Ross v. the United Kingdom (no. 62322/14). The Court’s case-law may also develop because of the privacy-friendly jurisprudence of the Court of Justice of the European Union in the cases Digital Rights Ireland, Google Spain und Google, Ryneš, Weltimmo and most recently, Schrems.

Protecting journalists
Already, the Court is especially mindful of chilling effects on journalism by surveillance (Telegraaf Media Nederland Landelijke Media B.V. and Others v. the Netherlands). Journalist’s sources are especially vulnerable both to mass surveillance and to laws obliging journalists, under penalty, to disclose their personal information. These laws must meet the principles established by case-law of the European Court of Human Rights.

The confidentiality of sources, and the credible protection to whistle-blowers are essential for all media, including bloggers and other non-traditional media workers, to fulfil their role as public watchdogs. Too often, security measures are used as pretexts to infringe upon the right to freedom of expression of journalists and their sources. In this vein, the Council of Europe three-year Europe-wide programme to support national mechanisms to protect inter alia, journalists, ombudsman institutions and press commissioners, as announced by the Secretary General, needs to be sensitized to the implications of mass surveillance.
Democratic oversight of security and intelligence services is essential.

As the Council of Europe Commissioner for Human Rights argues in his Issue Paper the oversight of security services is “fundamental to ensuring that these institutions both contribute to the protection of the populations they serve and respect the rule of law and human rights in undertaking this task.” Implementing the Commissioner’s recommendation will allow Council of Europe member states to establish or reestablish a national dialogue on the human rights obligations of these services. Similar suggestions have been made by the 2015 Venice Commission report on democratic oversight of security services and signals intelligence agencies. The role in using democratic oversight to limit human rights abuses by these agencies needs to be further explored.

International cooperation in the establishment of a human rights-based framework for surveillance is essential to reestablish public trust in the Internet, especially in the light of the de facto impact that US companies and US laws have on European data subjects. First positive steps, including  the September 2015 agreement by the EU and US to sign a data protection ‘umbrella agreement’ that covers personal data that is shared between US and EU law enforcement, must be continued. As a clear sign that human rights of Europeans matter, the European Parliament, however, has made it clear that its acceptance of the ‘umbrella agreement’ is premised upon US legislation giving Europeans data protection rights before US courts.

The 2015 Report by the Secretary General of the Council of Europe called for a “shared responsibility for democratic security in Europe”. Illegal mass surveillance by democratically unaccountable intelligence services flies in the face of this call. Debating the implications of mass surveillance, and proposing timely remedies, is therefore essential.

Posted by Matthias at 2:22 PM No comments: 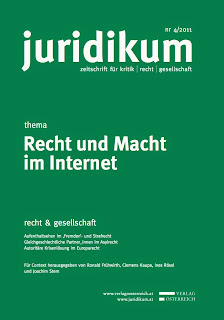 Posted by Matthias at 2:43 PM No comments: